I should have posted this on Monday, but it took me two days to recover from staying up until 5.30am on Oscars night, liveblogging for Mostly Film. But I’m better now, you’ll be pleased to hear, so I’ve gone back and done the maths and I am delighted to be able to inform you that I did beat my 50% hit rate from last year, though not by much – I correctly predicted 15 of the 24 winners, which (I think, I’ve never been brilliant at sums) works out at 62.5%. The joy is tempered slightly – only slightly – by the fact that the beloved managed 19 out of 24, but I console myself with the knowledge that had I allowed myself to change my mind in the moments before some of the awards were announced, I would have done better (it was pretty obvious by halfway through the night that Jessica Chastain for actress, Lincoln for picture and Spielberg for director were all going to be off the mark, though I still wouldn’t have guessed at Ang Lee, even though I am glad he won because he’s so nice).

Anyway, that’s enough of that. On to the dresses! It wasn’t a standout year, I think. There was less beige than usual, but it was mostly replaced by bridal white (click on images to enlarge):

Or a combination of the two:

…so popular, in fact, that Halle Berry and Stacy Keibler, wearer of my favourite dress from last year by miles, wore his’n’hers versions of the same dress: 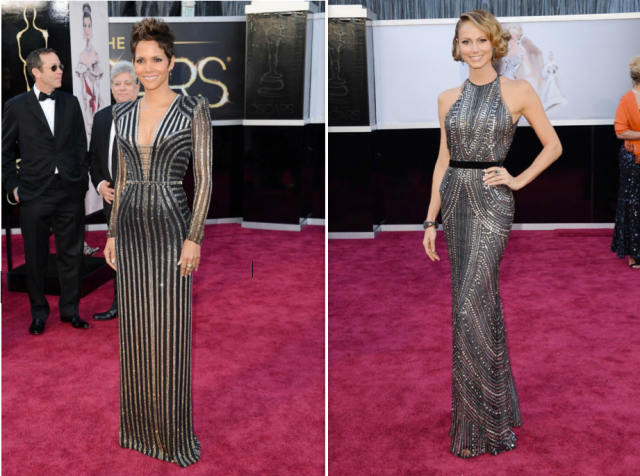 All of which made anyone who turned up in a bright colour look very daring, although it’s far to say that Jane Fonda’s choice was, in fact, pretty daring:

I had two favourites in the end. Jenna Dewan-Tatum is clearly one of those women who looks even better pregnant – look at her literally glowing in that picture at the top of the page! – and I love her dress, even though it’s the same as everyone else’s. But for me the very best combination of dress, hair, makeup and all-out movie-starry stunningness came from Jessica Chastain:

In a non-vintage year not just for frocks but for both the ceremony and the winners too, it’s good to know that there are still nominees who can turn up and knock it out of the park, even if they don’t go home with the prize.

Next year, though, I might take two days off work afterwards.