I like watching international football in pubs in other countries. I think it’s because I can’t understand most of the commentary or the reactions of the people around me, so I just get to watch the game and avoid the dimwits and the thugs who beset most attempts to watch an England game in an English pub.

The last time I watched a major football tournament whilst abroad was in 2004, when I was in Alicante. Euro 2004 took place in Portugal, and on the news one evening a reporter interviewed people living near some of the stadiums to ask whether their lives were being disrupted by the football. “We’ve heard reports that there are English people rioting in the Algarve”, said the reporter. “Is that true?”. The local shrugged. “There are always English people rioting in the Algarve”, he said. “I don’t think it’s anything to do with the football.”

I was also in Spain for the 1994 World Cup, on a post-A-levels holiday with three friends. We caught a coach at Bromley South and travelled for a day and a night to get there, and a day and a night to get back. In between we spent a fortnight sleeping in a caravan on a rickety campsite somewhere on the Costa Brava; eating chips and salad and drinking sangria, making friends and getting into fights with the locals in the nearby strip of bars and restaurants that was the closest thing the area had to a town, swimming in the campsite pool and watching the football. I don’t remember anything about the football, except that I enjoyed it, and that it marked the point at which I got back into football after renouncing it forever following the debacle of Palace’s defeat by Manchester United in the 1990 cup final.

(That holiday was also the source of one of those weak jokes that I make instinctively and against my better judgement every time I hear the feeder line. As we boarded the coach the driver made an announcement giving us useful information such as where to find the toilet and how soon we would be making a cigarette stop. “There are rubbish bags at the end of each seat”, he concluded. “Oh I don’t know”, said a teenage boy behind me. “”They look quite nice to me.”)

This time, we were in Cyprus for the beginning of the World Cup. It occurs to me that another reason to watch football abroad is that lager tastes better in hot countries, and lager is the natural accompaniment to a game of football. Here’s the first lager of this year’s World Cup – a small Keo, in the Blazing Saddles Tavern in Coral Bay: 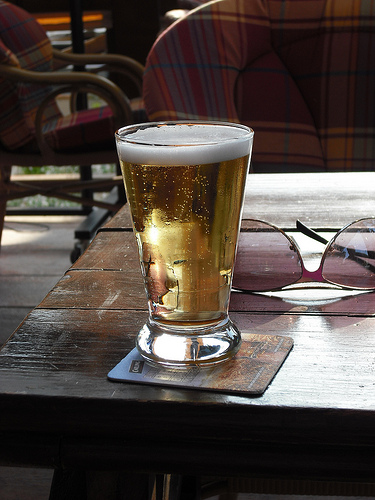 We watched England’s first game, against the USA, in a bar just around the corner from our apartment, on Tombs Of The Kings Road (did I mention that I love Cyprus?). Most of the crowd was English, though there were pockets of locals who had just come to eat and were largely bemused by the hooting and wailing of the white-shirted masses. With half an hour until kick-off, the barmaid distributed vuvuzelas and everyone gave them an experimental blow. They all sounded the same – just like the ones on TV – except for ours, which was the Barry White of vuvuzelas and emitted a deeply sonorous and surprisingly loud BLART which made everybody look at us momentarily, until we put it away.

A few minutes before the match was due to start, the manager decided to see whether he could get an English commentary version of the game. There were six or seven large screens around the outdoor area, where we were all sitting, but the controls were indoors, so he had to shout instructions to someone in the kitchen in order to navigate the channel browser. My Greek consists of about eleven words so I couldn’t make out the precise nature of what occured next, but somehow the TV ended up on a channel broadcasting what I think I would describe as hardcore porn (I am using a definition provided many years ago by my friend A, who told me it’s hardcore if “you can actually see it going in”). The manager sprang into action and switched off the TV, but this didn’t stop the scenes from being projected on to the remaining six-foot screens around the bar. Fortunately, since it was 9.30pm, there were no children in the bar, so it didn’t really matter that it somehow took them a good three minutes to switch over to another channel. By the time we got back to the Greek-language channel we’d started with, we’d missed the national anthems, but it was worth it for the spectacle of the four middle-aged woman sitting opposite us, who I think enjoyed their three minutes of free porn more than I’ve ever seen anyone enjoy anything.

I don’t much care whether England win or lose on Wednesday: my heart belongs to club football and Crystal Palace, and I am as happy watching Spain or Nigeria or Mexico, and as invested in the outcome, as when I watch England. But so far this World Cup seems to have been lacklustre, with a disappointingly poor show from African sides and some teams barely bothering to turn up at all (I’m looking at you, France). But there’s another week or so left of group games and then the knock-out stages to go, so there’s hope yet. For the record, my prediction is Holland, but I should warn you that I have never once got it right.