I never used to like this song, because I have an instinctive aversion to things which other people think are cool (I would make a terrible hipster), and because I agreed with all of this article, but then I found this 1992 TOTP version where they’ve already, almost thirty years ago, changed the words, which makes Laurence Fox’s characteristically ill-thought-through and petulant outburst and the Pogues’ response on Twitter this time last year even more delicious:

So here’s the thing. This was on the list from the start, but although I love Kirsty (and she has an extra connection with Christmas in my mind, because my parents once spent Christmas morning with Peggy Seeger and Ewan MacColl, although I was too teenagedly grumpy to join them), I never used to love this song. I don’t know why: probably for the same reason I don’t much like Withnail And I and am ambivalent about seeing Hamilton next week, which is that when other people like something too much, it puts me right off.

Anyway, somehow over the years I got to like it a bit, maybe enough to not press “skip” when it came on, and since this year is about amazing singer-songwriters and Kirsty absolutely was one, it was an obvious pick for a late-December slot. And then a couple of days ago I saw these tweets from Justin Myers, aka The Guyliner: 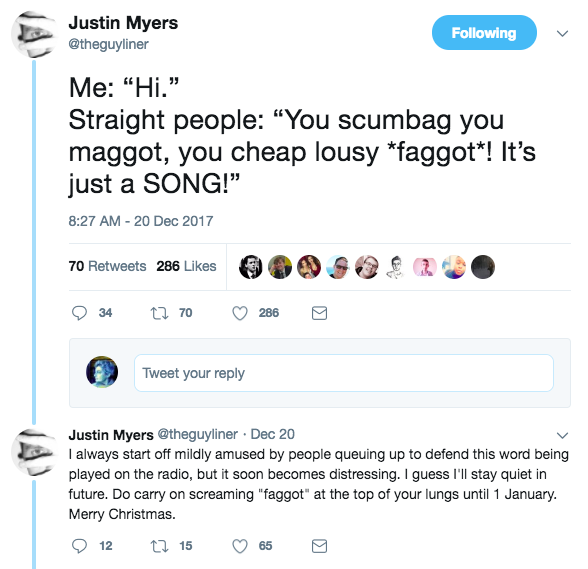 …and I thought, OH YEAH. You know when you realise something so blindingly obvious that you’re ashamed that it never occurred to you before? Well, THAT.

And it seems Kirsty felt the same way, because when she performed the song live in later years, she changed the words. So that’s the version we will listen to today, and I’m going back to hitting “skip” next time the original plays, because if 2017 has taught us anything it’s that the only way to combat inequality and injustice is to listen to the voices of those who are affected and change our behaviour accordingly. Also, look at Kirsty in her Christmas jumper and sunglasses and nineties hair! She’s so fricking awesome.

A number of people nominated this song, but Ursula got in first, which is handy because there are so many good things about Ursula that the only problem is knowing where to start. Or it would have been, except when I got in last night I saw a Facebook update from Ursula saying that she’s been offered a job she was after, so this is now a Happy New Job post as well as a Happy Christmas post.

Ursula is one of those rare people who is completely capable and sensible – you’d definitely put her in charge of things, if you needed someone to be in charge of things – but also very funny and lovely at the same time, and perfectly able to be silly when the occasion demands it (as, for example, in the photo of her family of six posing very solemnly for the camera, each – including the baby – wearing a false moustache).

Ursula and her family and especially her gorgeous children make me happy, and so does this song, so they’re a good match. Happy Christmas and happy new job, Usch!

I thought you might be in the mood for something partyish on the first Saturday of the month, so here are Kirsty and the Pogues doing their thing. True story: two Christmasses ago my friend S managed, accidentally, to invoke a setting on her phone which played “A Fairytale of New York” over the top of her recorded answerphone message, so that anyone who tried to call her had to listen to Shane wailing in the background while they waited to leave voicemail. It was all very odd.