I’ve just read a book of stories by H. P. Lovecraft, because his was the first name that came back when I took the I Write Like test, and because I am generally in favour of well-written horror stories.

Well, I’m not sure that these are either of those things. The writing’s not bad, exactly, but it’s fairly impenetrable in places. I’ve chosen an extreme example, but I have limited patience for paragraphs like this, from The Lurking Fear (unedited; ellipses his):

Where the stories work best is where there’s less fervid description and something is actually happening. The Dunwich Horror is really good up until the moment when the genuinely frightening half-human creature quietly disappears, at which point it becomes too abstract to retain my interest.

Maybe this is my fault: maybe I don’t have a brain that’s equipped to loosen itself from the bounds of mundane experience and appreciate a fantasy world where nothing bears any relation to anything. But these stories are fantasy, or maybe science fiction, not horror. To my mind, real horror arises from the creeping realisation that something that feels familiar is not what it seems. There are writers who can rouse me to night-time terrors – Mary Shelley, Stephen King, Edgar Allen Poe – but for me there’s not enough of real life in Lovecraft’s stories to make them truly frightening.

That said, the guy himself is pretty frickin’ scary: 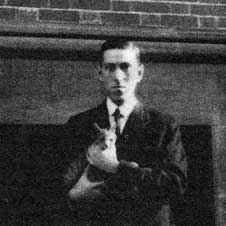