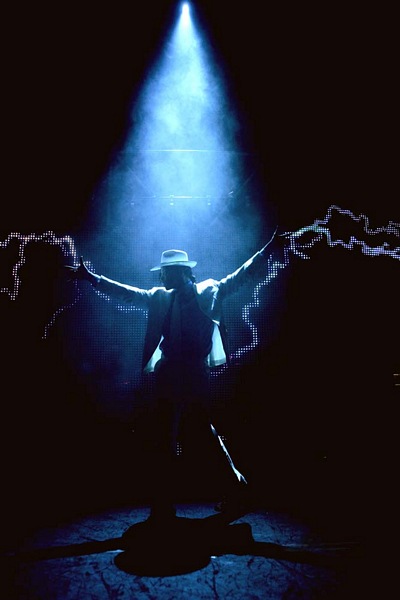 I went to see Thriller Live last week. I wouldn’t have sought it out of my own accord and I didn’t really know what to expect, but I was prepared for something quite weird. And it was quite weird, but in a cheerier and more innocent way than I was expecting. There’s no story; it’s just two and a bit hours of some singers, dancers and musicians performing the biggest hits of Michael Jackson’s career, in chronological order (which, incidentally, makes it fairly easy to work out which ones they’re saving for the encore).

The early songs, performed by a Jackson Five with the worst afro wigs I have ever seen, feature a very sweet little boy with the voice of an angel playing the youthful Michael, but from Off The Wall onwards the lead vocal role is shared between four singers: a guy who sounds exactly like Michael Jackson, a guy who looks exactly like he’s from the 1980s, a woman who is obviously the one they go to when a song is too hard for any of the others, and a guy who sounds more like Michael Jackson than the last two, but makes up for it by being skinny and white. They are backed up by a troupe of dancers, who are kind of amazing, and by a live band who are for the most part hidden, except when one of them is allowed on to the stage to perform a particularly tricky solo, like the guitar line in Dirty Diana.

Everyone is really, really good, and there are some nice costumes, especially in the songs from Bad where everybody gets to pretend it really is the 1980s. But the main thing I took away from it was an overwhelming sense of uncomplicated Eurovisionesque joy. Everybody in it is so happy, all the time! Sensibly, the narrative voiceover which introduces the show and describes the Jacksons’ rise to fame is ditched early on, so that we don’t have to hear any of the less wholesome details of Michael’s life as a solo artist. And even more sensibly, the post-Bad hits are limited to Earth Song and Heal the World. The rendition of the former almost tips over into being unbearably twee, with the performers dressed all in white under a giant projected globe, but they rescue it just in time by bringing back the small boy from the beginning of the show to sing Heal the World.  And it’s just lovely.

Michael Jackson is undeniably a strange and disturbing person, but the songs are as good as they ever were. If you liked them then, I think you should go along. If you tell me when you’re going I might even come with you, but don’t tell anyone I said so.

(Edit: it belatedly occurs to me that describing someone as “skinny and white” is no guarantee that he doesn’t look like Michael Jackson. But he doesn’t – see?)

One thought on “The funk of forty thousand years”