There was a programme on BBC2 this evening about Taipei 101, the counterweighted skyscraper I wrote about a few months ago.  If you can endure Richard Hammond (who, separated from the others, is fairly inoffensive, though I prefer the wild-haired one and have no time at all for Clarkson), it’s worth checking out on the iPlayer.  The show focuses on the various feats of engineering which went into the building’s construction, and I was pleased to discover that the story of the building is just as fascinating as the finished product.

Anyway, I’ve never been to Taiwan, though I’d like to,  so I don’t have any photos of Taipei 101.  Instead, here’s a photo of the view from the top of the Yokohama Landmark Tower, reflected in a mirror inside the viewing gallery: 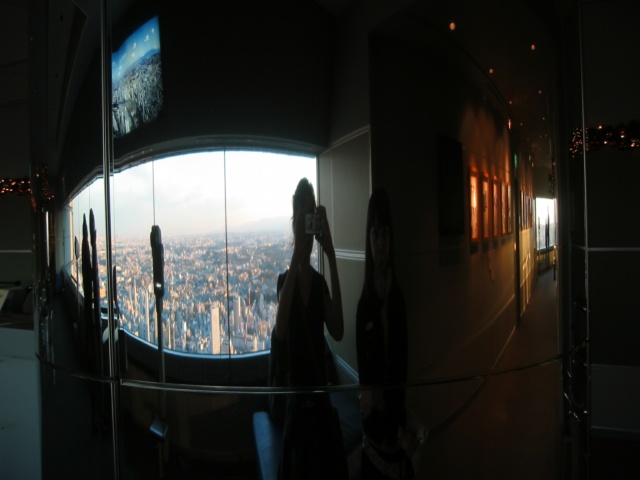 This is interesting, if you are interested in skyscrapers.  Or people.

After a series of stories about mooted and improbable mile-high buildings, it’s almost a novelty to read about one which is actually being built as we speak.  The new Shanghai Tower will be a respectable 632 metres tall, making it the tallest building in China.  What I like most about this story, though, is the way the illustrations make Shanghai look as though it’s either in space, or the future, or both.

Heavens, quite literally, above.

Even the graphic makes me a bit dizzy.

Soon, you won’t even need to get in a plane to join the mile high club, if plans for this unlikely-looking structure in Dubai go ahead (alright, it’s a kilometre high.  That’s ONE KILOMETRE).

Here, courtesy of Device Daily, is a chart comparing it to various other buildings around the world.  If you squint, you might just be able to make out Canary Wharf over there on the right:

I’m mesmerised by this YouTube video, which shows a massive counterweight suspended inside Taiwan’s Taipei 101, the world’s tallest building (for now) acting against the tremors felt from the Sichuan earthquake on May 12. I don’t quite understand the physics behind it, but the weight, which more or less stays still as the building sways around it, apparently dampens the effect of the movement. You’ll find an explanation from someone who knows what they’re talking about over at BLDGBLOG:

As earthquake waves pass up through the structure, the ball remains all but stationary; its inertia helps to counteract the movements of the building around it, thus “dampening” the earthquake.

I’ve just come across this design for an eco-efficient but super sexy new skyscraper on the Dubai waterfront. If it’s genuinely possible to build green skyscrapers, and to make them look this good (though it may lose something in the translation from paper to stone) then all kinds of possibilities open up, especially in housing, where before long we are going to be forced to have some new ideas.

Edit: having spent five minutes investigating, I see there are lots of designs for green skyscrapers out there. If I get a chance I’ll link to some of them later on.