A publisher of tour guides has written to me to ask whether they can use one of my Paris photos in the next edition of their guide. I said yes, of course, but I do hope they straighten it up a little before they publish it:

Paris does human-scale street life better than any city I can think of off the top of my head, with the possible exception of Beijing.

What I really meant was

Not including London, Paris does human-scale street life…etc etc.

London is bigger, so there are more places where it doesn’t happen, but when it does, it’s as good as anywhere else’s. I was reminded of this yesterday coming through Brixton Market, which is still the most interesting place I know in London.

…was still lovely, of course. We caught the sun on the first day and I realised I hadn’t been there in good weather since 1998. It makes walking with no particular purpose in mind much more appealing.

In my second, or maybe third, year at university, I wrote an essay about Haussman’s Paris, and the period between 1853 and 1870 when he, along with Napoleon III,  was responsible for what amounted to a wholescale razing and rebuilding of large swathes of the city. Huge numbers of slum-dwellers were effectively banished; their homes replaced by shiny new apartment buildings which only the rich could afford to live in. This is still the main reason why Paris’s inner city, in the sense in which we use the term, is largely outside the city.

Anyway, one of the things Haussman succeeded in putting in place was a set of rules governing future development in the city, which meant that subsequent building projects have had to abide by the aesthetic rules devised during his period as Prefect of the Seine. As a result, one of the most immediately Parisian of images is the wide, tree-lined boulevard edged with elegant buildings of greyish-white stone, never more than five stories high.  This is the Paris that Haussman defined, and it’s still there much as he envisaged it.

And yet, there’s more variation in Paris than you might think, and it’s the sudden differences as much as the general sameness which make it a beautiful city. Not just the Eiffel Tower and the Centre Pompidou, but the unexpected sights which lurk around every other corner: a flea market; a gloomy courtyard, usually occupied by a grumpy-looking cat; a carousel; a sudden sharp hill leading up, or down, to a new vista. Paris does human-scale street life better than any city I can think of off the top of my head, with the possible exception of Beijing.

And it has La Grande Arche de la Défense, which is really big and has a hole in it: 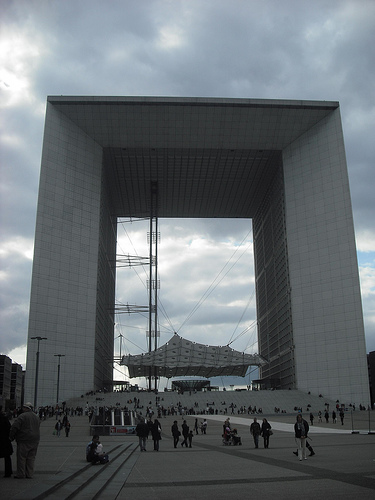 I’m off for three days of eating, drinking, eating, walking and eating. I fall in love with Paris all over again every time I go, including the time when I went with both my siblings, and my brother had to come a day late because his passport had expired, and my sister got food poisoning and puked all the way home.

Have a lovely bank holiday weekend, unless you’re outside the UK, in which case just have a lovely weekend. Or is May 1 a holiday everywhere?

The centre may be for the most part the same as it was when Georges-Eugène Haussmann introduced his planning reforms in the 1850s, but in other parts of Paris all kinds of interesting things are happening.  La Défense, to the north-west of the centre, is the city’s business district and has the highest concentration of skyscrapers of any urban area in Europe.  Since the 1980s the most striking of these has been La Grande Arche, which is brilliantly and thoughtfully designed so that it lines up with the Arc de Triomphe and the Arc de Triomphe du Carrousel, whose name I never knew before today, meaning that if you stand in the Tuileries gardens you can look straight through all three of them, over a distance of several miles.

But today inhabitat has designs for a new, ecologically-minded skyscraper which is about twice the height of the Grande Arche (though still smaller than the Eiffel Tower – some things are sacred) and which looks great.  I’m very happy to live in a time when people have discovered that buildings don’t have to be square or rectangular.  We’re building pyramids and pods as well as star-shaped cities and Teletubby houses.  It all makes London’s shard of glass seem almost pedestrian.